August was a slow month in the Toronto real estate market, which is fairly typical. TREB reported 6,357 sales, down 34.8% from the 9,748 sales we saw in August of 2016. While that sounds pretty dramatic, it’s more than the 6,418 sales reported in August of 2012 (which I just picked randomly when looking for something to compare this year to). 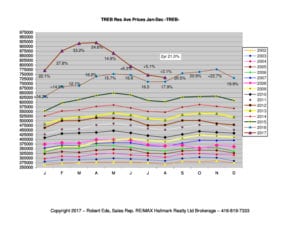 The average sale price has been volatile this year. For the last decade or so, that number has trended upwards steadily, and only sometimes dramatically. Then, in the first part of this year it spiked way up, mostly due to extremely tight supply. Then, as the ‘spring market’ got going and more supply hit the market, the average price dropped back down to normal. The average sale price in August was $732,292 – well below the April average, $920,791. Still, that number is up 3% over August 2016. Check out the graph (click to enlarge, courtesy my RE/MAX Hallmark colleague Robert Ede). Despite the hysterical headlines about a ‘plunging’ Toronto real estate market, we are still up over last year!

The condo segment had an interesting month. Sales volume in the 416 was down 24.5%, to 1,476 transactions. At the same time, the average price spiked 20.9%, to $540,169. That indicates to me that supply was limiting sales volume, and forcing buyers to step up.

Another number that I have been tracking recently is Active Listings. There were 16,419 at the end of last month, up 65% over August 2016 (9,949). Again, sounds dramatic, but in August 2012 there were 19,043 Active listings. So, when we are looking at what direction the market is going, it’s important to think past the short-term graph (which looks pretty wacky) and try to step back for a broader view. Supply is still tightly constrained, and demand is still strong. Look no further that the latest economic data and we’ll see that the economy and job creation are really picking up steam. That always boosts the real estate market. Also, this week’s Bank of Canada rate increase, and subsequent mortgage rate increases, should act to push more buyers into the market, as they look to lock in a great rate before those rise too much more….

Of course, anything could happen, but I expect the fall market to be busy, and for prices to start going back up – although I hope at a more sustainable rate than we saw earlier this year. We’ll know more in the coming weeks!

Sorry, the comment form is closed at this time.